What Is Fifth Disease?

Fifth disease is a viral illness that most kids recover from quickly and without problems. It's especially common in kids ages 5 to 15.

Fifth disease is known for a rash that makes a child’s cheeks bright red. That’s why it’s sometimes called a "slapped cheek" rash. A few days later, the rash spreads down to the trunk, arms, and legs. It usually lasts 1 to 3 weeks.

What Are the Signs & Symptoms of Fifth Disease?

These symptoms clear up, and the illness seems to be gone until the rash appears a few days later. Kids younger than 10 are most likely to get the rash.

The rash usually starts on the face and makes the cheeks bright red. Then, red (usually lighter) blotches appear on the chest, back, arms, and legs. The rash can be itchy. After a few days, it takes on a lacy net-like look. 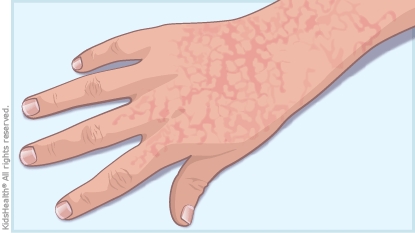 Sometimes, the rash can seem worse when the skin is warm or in the sun. It comes and goes before going away completely after a few weeks.

In older kids and adults, fifth disease might not cause the red cheek rash, but can cause joint swelling and pain that can last from weeks to months and, very rarely, years. But in time, it usually goes away without any lasting problems.

Fifth disease (also called erythema infectiosum) is caused by parvovirus B19. The virus spreads in droplets when an infected person coughs, sneezes, or touches a surface. It is most contagious before the rash appears, when the symptoms seem like that of a common cold. By the time the rash appears, the body has already been fighting the infection for a while and the person’s not contagious anymore. Kids usually don't spread the infection once they have the rash.

How Is Fifth Disease Diagnosed?

Doctors usually can diagnose fifth disease by seeing the rash on the face and body. If someone doesn't have the rash but does have other symptoms, the doctor may do blood tests to see if is causing them.

How Is Fifth Disease Treated?

Fifth disease is caused by a virus, so can't be treated with antibiotics (antibiotics kill bacteria, not viruses). In most cases, it is a mild illness that clears up on its own, so no medicine is needed.

Usually, kids with fifth disease feel OK and just need to rest. After the fever and mild cold symptoms are gone, there may be little to treat except any discomfort from the rash.

If your child's rash is itchy, ask the doctor for advice about easing discomfort. The doctor may also recommend acetaminophen for a fever or joint pain. Do not give aspirin to your child, as it has been linked to a rare but serious illness called Reye syndrome when given to kids who have a viral infection.

What Problems Can Happen?

Parvovirus B19 can temporarily slow down or stop the body from making oxygen-carrying red blood cells (RBCs). This can lead to severe anemia, which needs to be treated in a hospital. A person with severe anemia may be pale, dizzy, or drowsy.

Parvovirus B19 infection during a woman's pregnancy may cause problems for the fetus, especially during the first half of the pregnancy.

Can Fifth Disease Be Prevented?

It’s tough to fully prevent fifth disease. There is no vaccine to prevent it. But after someone has fifth disease, they won’t get it again. Their immunity after infection lasts throughout life.

Washing hands well and often is the best way to avoid the virus that causes fifth disease and can help prevent the spread of many infections.

When Should I Call the Doctor?

Call the doctor if your child develops a rash, especially if the rash is widespread or your child also has a fever, cold symptoms, or joint pain.

Also call if you're pregnant, have a weak immune system, or have a blood disorder, and you: