What Is the Thyroid?

The thyroid is a small gland below the skin and muscles at the front of the neck, at the spot where a bow tie would rest.

It's brownish red, with left and right halves (called lobes) that look like a butterfly's wings. It weighs less than an ounce, but helps the body do many important things, such as grow, regulate energy, and go through sexual development.

What Are Goiters and Thyroid Nodules?

An enlarged thyroid gland can be felt as a lump under the skin at the front of the neck. When it is large enough to see easily, it's called a goiter.

A thyroid nodule is a lump or enlarged area in the thyroid gland. A nodule may simply be swollen tissue, an overgrowth of normal thyroid tissue, or a collection of fluid called a cyst. Most thyroid nodules in children are not caused by cancer.

Goiters can happen due to inflammation of the thyroid gland or when the gland makes too much or too little thyroid hormone. A goiter also can develop with other thyroid problems, such as infections of the thyroid or thyroid cysts, tumors, or thyroid cancer. People who don't get enough iodine in their diets also can get an enlarged thyroid. But this is rare in the United States because foods here usually supply enough iodine. 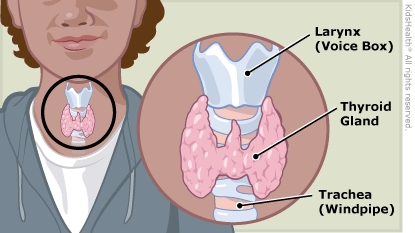 Kids can be born with a goiter or develop one later in life. A goiter that's present at birth is called a congenital goiter. These can be caused by:

Hashimoto's thyroiditis: The immune system attacks the thyroid, making it swell. Sometimes this swelling can be dramatic and even look like a growth. Over time, the thyroid can become so damaged that it can't make enough thyroid hormone. In that case, a person might need to take a thyroid hormone.

Graves' disease: This is the most common cause of a goiter with high thyroid hormone levels in kids, and the top cause of hyperthyroidism in teen girls. The immune system attacks parts of the thyroid gland, making it swell and produce too much thyroid hormone. It also can cause inflammation and swelling around the eyes.

Colloid goiter (also called the "adolescent goiter"): The thyroid sometimes grows a lot during puberty, and can look abnormally large. This is not associated with any thyroid hormone problems. The thyroid works normally and often gets smaller over time with no treatment.

Viral or bacterial infections: Infections can cause inflammation and enlargement of the thyroid. These goiters are often painful.

The most common cause of a thyroid nodule in kids is actually a "pseudonodule" or "fake nodule." This is when inflammation of the gland (due to an infection, Hashimoto's thyroiditis, or Graves' disease) makes the thyroid swell in one place. This inflammation might look like a nodule, but there isn't really any nodule at all.

The next most common type of thyroid nodule is a cyst, which usually happens when normal fluid pockets in the thyroid get bigger. These types of nodules are always benign (are not cancers), but may continue to grow over time.

Thyroid nodules that are due to growths (tumors) are common in adults but less common in kids. Most thyroid nodules are benign and doctors don't always know why they happen.

What Are the Signs & Symptoms of Goiters and Thyroid Nodules?

A goiter is most often spotted because it's in the very front of the neck and moves up and down when a person swallows. People with a goiter might have the sensation that food is stuck in the throat, especially when they lie down or sleep on their backs.

But goiters often grow very slowly over months and years before being noticed. It can be hard even for parents who pay close attention to notice the change early.

How Are Goiters and Thyroid Nodules Diagnosed?

Goiters and thyroid nodules are often found by families and doctors by looking at and touching the neck. Lab tests and a thyroid ultrasound can give doctors a good idea of what's going on. If a thyroid nodule is found, extra testing is sometimes needed.

A fine-needle biopsy might be done to see whether a nodule is cancerous. During the biopsy, the doctor inserts a thin needle through the skin into the thyroid nodule (the skin is numbed with medicine first). Through the needle, the doctor takes a sample of tissue or some fluid from a cyst. The tissue or fluid is then sent to a lab. In some cases, the nodule might have to be surgically removed for more a detailed examination.

How Are Goiters Treated?

Depending on the test results, a goiter might not need to be treated. If it does, treating the thyroid disease causing the goiter usually will decrease or control the enlargement.

Surgery might be needed if the thyroid keeps getting bigger even with treatment and causes discomfort or a very large lump in the neck.

How Are Thyroid Nodules Treated?

Thyroid nodules don't always need treatment. Many nodules cause no symptoms and may even get smaller over time.

Thyroid nodules may need treatment if they grow or cause symptoms, or if there is concern that it could be a cancer. Surgery is the preferred treatment for thyroid nodules in children. This might involve removing part of or all the thyroid gland.

If needed, surgery is done in a hospital under general anesthesia, so the child is asleep and feels nothing. If only part of the thyroid is removed and the rest of the gland is healthy, a child may not need to take a thyroid hormone after surgery. If the rest of the gland isn't healthy or if the whole thyroid is removed, the child will need to take a thyroid hormone.

Thyroid cancer is relatively uncommon. When it does happen, it is very treatable. Most thyroid cancers can be cured or controlled with treatment.

When Should I Call the Doctor?

Call your child's doctor if: