Clubfoot is a birth defect that makes one or both of a baby's feet point down and turn in.

Surgery used to be the main treatment for clubfoot, but orthopedic surgeons (doctors who focus on conditions of the bones, muscles, and joints) now prefer the Ponseti method. This is done in two phases:

Casting by an orthopedic surgeon or care team member who has been trained in the Ponseti method usually starts when a baby is a week or two old, and lasts for 5 to 7 weeks. When the foot is in its final, correct position, the baby is fitted with a brace.

What Is a Clubfoot Brace?

A clubfoot brace (often just called an orthotic) has two parts: a bar (usually metal) and special shoes (or boots) that attach at each end. The bar is the same length as the distance between the baby's shoulders. It slides or clicks into the bottoms of the shoes. 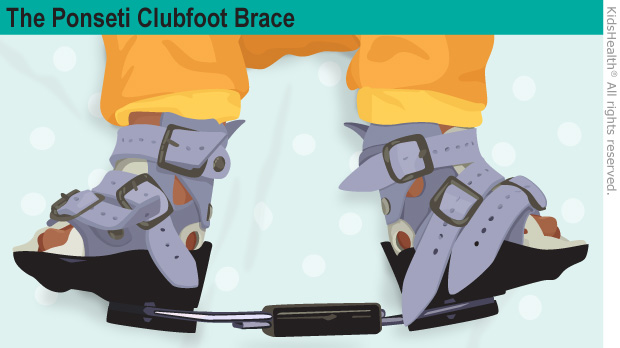 The brace keeps the "fixed" clubfoot (or feet) in the corrected position so it doesn't twist back to where it was before the casting phase. Both feet are braced, even if the clubfoot is only on one side.

How Long Is a Brace Worn?

The bracing phase will last 2 to 5 years. A child will wear the brace all the time (except during baths) for about 3 months, and then only during naps and at night after that.

Why Is Bracing Important?

The casting phase is also called the "correction phase." When it's finished, a child's feet will look normal and be properly positioned. So it might seem like the most important part of the Ponseti method is done.

But feet grow a lot and very quickly in the first years of life. Without the brace to keep a corrected clubfoot in the proper place, that rapid growth would send the foot back into the clubfoot position.

Therefore, the brace is as important as the series of casts. The brace keeps the corrected foot growing like it should. If the brace isn't worn as directed, the clubfoot will return. Then, the child has to start all over again, beginning with another casting phase.

What If My Baby Fusses About the Brace?

It's up to you to make sure your child wears the brace as the orthopedic surgeon directed. A brace may look uncomfortable, but won't hurt or bother your baby. It is new and different, though, so it can take kids a little while to get used to wearing one. But most adapt to the brace quickly. Before long, it's just another part of daily life.

Putting on the brace can be a challenge at first. Your baby might squirm, cry, and kick — but then will get used to the brace after a couple of days. Don't let your baby's fussiness tempt you to "let it go" for a night or two. Removing the brace teaches your little one that crying gets results — and then it will take longer and be harder for your baby to accept wearing it.

While your baby wore casts, he or she could move the legs independently. But because both feet are in the brace, the legs can only move together.

To help your child learn how to kick and swing the legs simultaneously:

While it might take them a little longer, kids wearing a brace can learn how to sit, crawl, and walk just like other kids their age.

What Problems Can Happen?

Some redness on the feet from the brace is normal. Serious skin problems are rare, but call the care team if:

These could be signs that the shoes are not tight enough. Don't put lotion or cream on irritated skin, as this can make the problem worse. Silicone tape can be placed over the areas as a “second skin." You also can use moleskin to protect any areas of irritation. Also call the doctor if your child's foot keeps coming out of the shoe or you can't get the heel to stay down in the shoe.

Making the Brace a Routine

Babies get used to wearing a brace very quickly. To help your little one accept it as a part of daily life, try these tips:

The daily bracing schedule can come with some frustrations. A baby might cry at first when the shoes and brace are put on, while an older, more active child might complain about wearing the brace to bed.

So it's natural for parents to consider skipping it sometimes, or to think that 3 years with a brace is long enough, even if the orthopedic surgeon recommends 5.

But even brief periods of not wearing the brace can cause problems. Besides making it harder for a child to get used to the brace as part of everyday life, skipping days can allow the foot (or feet) to very subtly move out of the corrected position. Then the brace won't fit as it should, making it uncomfortable for a child to wear. This cycle can lead to disuse of the brace — and the clubfoot will happen again.

It can help to find support from other parents who have gone through the Ponseti method with their kids. Look online for tips, advice, and support groups. And your care team has heard it all — never hesitate to contact them if you're feeling frustrated. They can give you advice or talk about the many Ponseti method successes they've seen.

What Else Should I Know?

Permanent correction of a clubfoot takes time. It's important for parents to work with the care team and follow the treatment plan to help their child get the best possible result. The Ponseti method is successful for most kids with clubfoot, and will let them walk, run, and play without pain.

After a clubfoot is fully corrected, kids will see their specialist for follow-up visits. After age 5, most only go once a year until they're done growing (around age 18) to make sure no problems develop.