How do you remember the way to your friend's house? Why do your eyes blink without you ever thinking about it? Where do dreams come from? Your brain is in charge of these things and a lot more.

In fact, your brain is the boss of your body. It runs the show and controls just about everything you do, even when you're asleep. Not bad for something that looks like a big gray wrinkly sponge.

What Are the Parts of the Brain?

Your brain has many different parts that work together. We're going to talk about these five parts, which are key players on the brain team:

You need your cerebrum to solve math problems, figure out a video game, and draw a picture. Your memory lives in the cerebrum — both short-term memory (what you ate for dinner last night) and long-term memory (the name of that roller-coaster you rode on two summers ago). The cerebrum also helps you reason, like when you figure out that you'd better do your homework now because your mom is taking you to a movie later.

Because of your cerebellum, you can stand upright, keep your balance, and move around. Think about a surfer riding the waves on his board. What does he need most to stay balanced? The best surfboard? The coolest wetsuit? Nope — he needs his cerebellum!

What's the Brain Stem? And What Are Involuntary Muscles?

Another brain part that's small but mighty is the brain stem. The brain stem sits beneath the cerebrum and in front of the cerebellum. It connects the rest of the brain to the spinal cord, which runs down your neck and back. The brain stem is in charge of all the functions your body needs to stay alive, like breathing air, digesting food, and circulating blood.

Part of the brain stem's job is to control your involuntary muscles — the ones that work automatically, without you even thinking about it. There are involuntary muscles in the heart and stomach, and it's the brain stem that tells your heart to pump more blood when you're biking or your stomach to start digesting your lunch. The brain stem also sorts through the millions of messages that the brain and the rest of the body send back and forth. Whew! It's a big job being the brain's secretary!

The pituitary gland is very small — only about the size of a pea! Its job is to produce and release hormones into your body. If your clothes from last year are too small, it's because your pituitary gland released special hormones that made you grow. This gland is a big player in puberty too. This is the time when boys' and girls' bodies go through major changes as they slowly become men and women, all thanks to hormones released by the pituitary gland.

This little gland also plays a role with lots of other hormones, like ones that control the amount of sugars and water in your body. 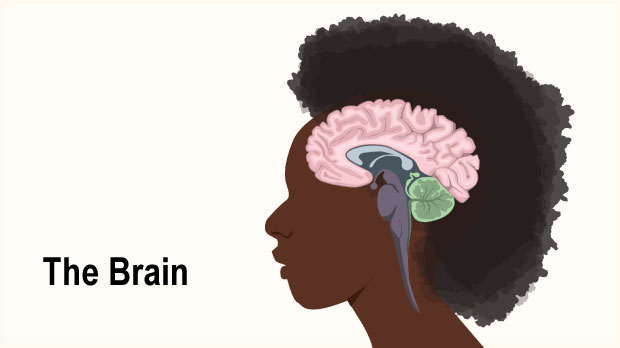 The brain is like a computer that controls the body's functions, and the nervous system is like a network that relays messages to parts of the body.

Click through this slideshow to learn more about the brain and nervous system.

© 2023 The Nemours Foundation/KidsHealth. All rights reserved.
/

What's the Nervous System? And What's the Spinal Cord?

So the brain is boss, but it can't do it alone. It needs some nerves — actually a lot of them. And it needs the spinal cord, which is a long bundle of nerves inside your spinal column, the vertebrae that protect it. It's the spinal cord and nerves — known as the nervous system — that let messages flow back and forth between the brain and body.

If a spiky cactus falls off a shelf headed right for your best friend, your nerves and brain communicate so that you jump up and yell for your friend to get out of the way. If you're really good, maybe you're able to catch the plant before it hits your friend!

The nervous system is made up of millions and millions of neurons (say: NUR-onz), which are microscopic cells. Each neuron has tiny branches coming off it that let it connect to many other neurons.

When you learn things, the messages travel from one neuron to another, over and over. Eventually, the brain starts to create connections (or pathways) between the neurons, so things become easier and you can do them better and better.

Think back to the first time you rode a bike. Your brain had to think about pedaling, staying balanced, steering with the handlebars, watching the road, and maybe even hitting the brakes — all at once. Hard work, right? But eventually, as you got more practice, the neurons sent messages back and forth until a pathway was created in your brain. Now you can ride your bike without thinking about it because the neurons have successfully created a "bike riding" pathway.

With all the other things it does, is it any surprise that the brain runs your emotions? Maybe you had fun on your birthday and you were really happy. Or your friend is sick and you feel sad. Or your little brother messed up your room, so you're really angry! Where do those feelings come from? Your brain, of course.

Your brain has a little bunch of cells on each side called the amygdala (say: uh-MIG-duh-luh). The word amygdala is Latin for almond, and that's what this area looks like. Scientists believe that the amygdala is responsible for emotion. It's normal to feel all different kinds of emotions, good and bad. Sometimes you might feel a little sad, and other times you might feel scared, or silly, or glad.

How Can I Keep My Brain Healthy?

So what can you do for your brain? Plenty.