What Is Pectus Carinatum?

Pectus carinatum is when the ribs and the breastbone (sternum) grow outward and make the chest jut out. This gives the chest a birdlike appearance. That's why the condition is sometimes called pigeon breast or pigeon chest. 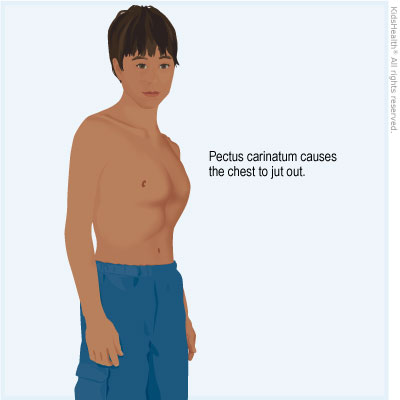 Kids who have it may have another health condition, such as:

What Are the Signs & Symptoms of Pectus Carinatum?

Kids with pectus carinatum have a chest that juts out. This usually doesn't appear until a child is age 11 or older.

The chest wall surrounds and protects the heart and lungs. So kids and teens with pectus carinatum may:

Some can develop asthma or get a lot of respiratory infections. 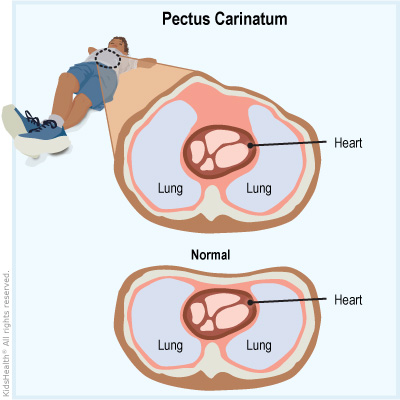 The condition gets worse as kids grow, and affects boys more often than girls.

How Is Pectus Carinatum Diagnosed?

Health care providers diagnose pectus carinatum based on an exam. If needed, they might also order tests such as:

How Is Pectus Carinatum Treated?

Kids and teens with mild pectus carinatum who aren't bothered by their appearance and don't have breathing problems typically don't need treatment.

If treatment is needed, a chest brace or surgery can help.

Kids whose bones are still growing can wear a chest brace. Much like how braces realign teeth, a chest brace will push the breastbone back to a normal position. Kids need to wear a brace for 6 months to a year. They can remove it for sports, showering, and other activities, but usually must wear it for 8 hours a day or longer.

In some cases, surgery can treat pectus carinatum. In the Ravitch procedure, a surgeon:

The surgeon removes the bar in a later surgery, usually after about 6 months. The Ravitch procedure is most often used for patients 13 to 22 years old.

What Else Should I Know?

Mild pectus carinatum won't need treatment if doesn't affect how the lungs or heart work. But when the condition is very noticeable, it can affect a person's self-image. Severe pectus carinatum can make it hard to exercise or play sports, and cause other health problems. In those cases, treatment can improve a child's emotional and physical well-being.

Most kids and teens who wear a brace or have surgery do very well and are happy with the results.